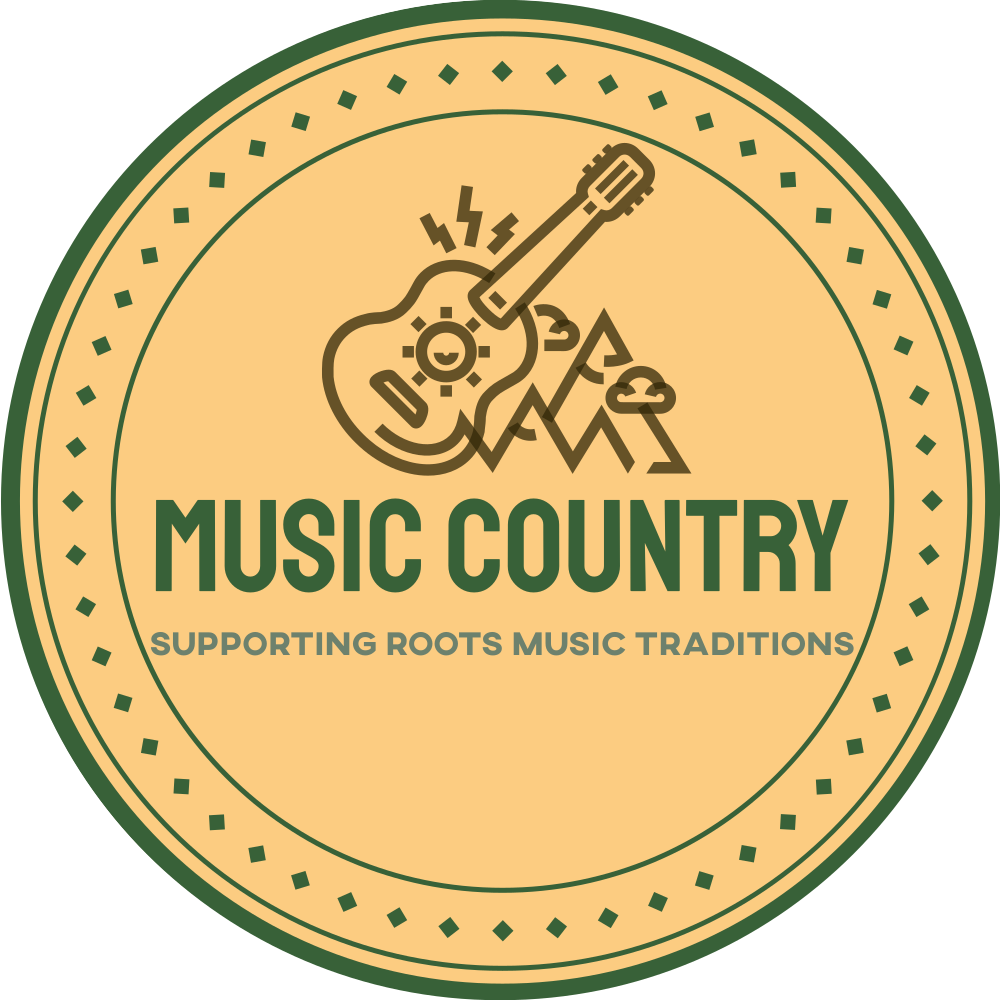 (Socially Distanced Version) October 10 from 11am to 5pm Governors Island, NYC Porch Stomp is a free outdoor festival of Americana and folk music & dance that takes place on Governors Island annually. This year there will be special measures in place to protect the health and safety of performers and attendees. You will also be able to enjoy some of the programming from home via live streaming and post-event streaming. Music Country will present a program with representation from five American Roots traditions at this year's Porch Stomp: Folk, Bluegrass, Black Roots, Native American, and Cajun. The schedule is below. Come to Governors Island on October 10th to enjoy this and other great Porch Stomp programming! Or check back here and on our Facebook page for live-streamed video and archived video.  ❧ Reserve a free Porch Stomp ticket ❧ Buy a ferry ticket ❧ Come enjoy the programming on the Music Country stage at Porch Stomp 2020! 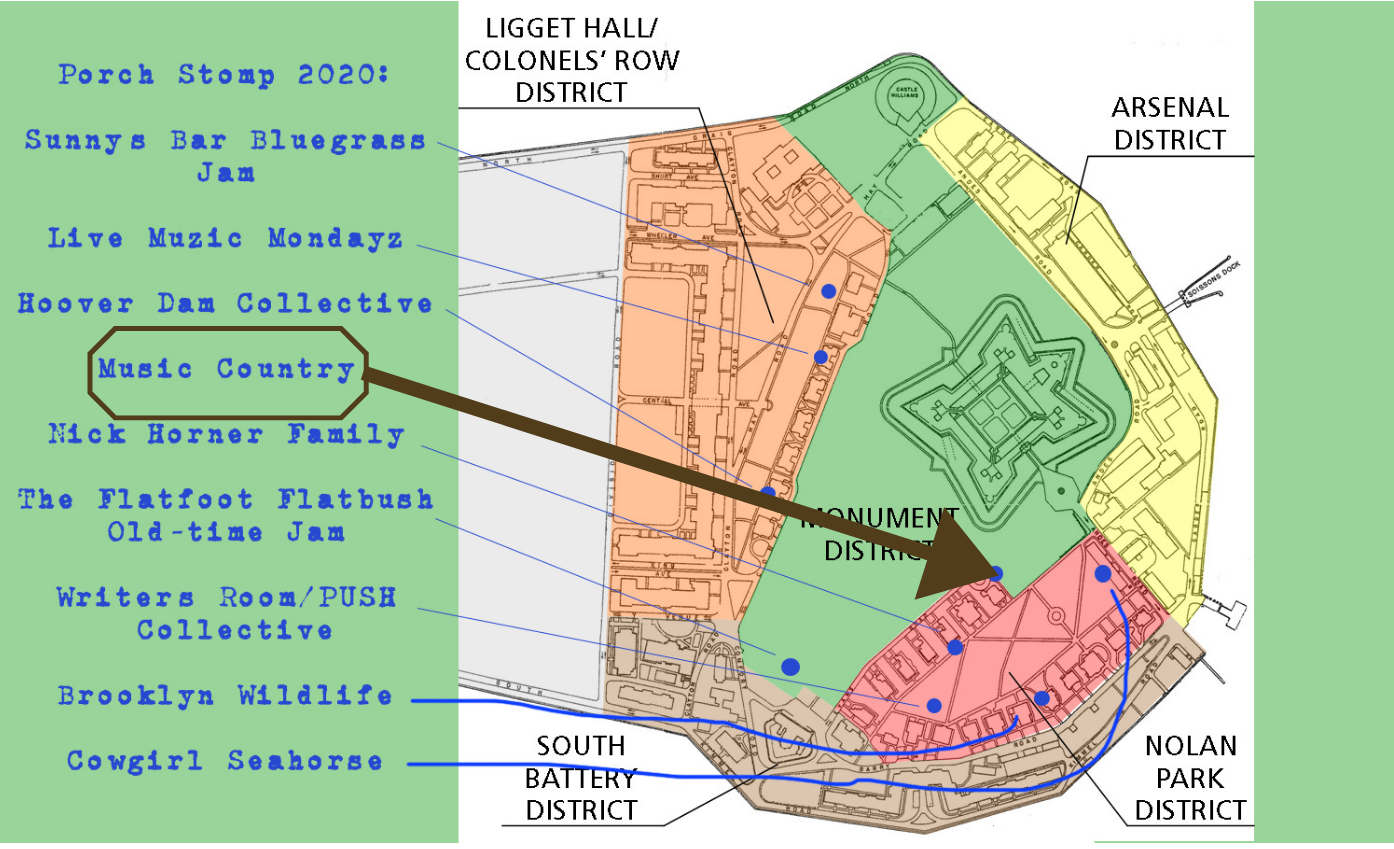 Also see our interactive Google Map
12:00 Folk Tinged Original Songs Nate Sabat is a JUNO-nominated bassist, vocalist, songwriter, and arranger currently based in Brooklyn, NY. He is a founding member of award-winning bluegrass band Mile Twelve. A native-New Yorker, he attended LaGuardia High School as a vocal principal and went on to study upright bass at the Berklee College of Music. He has performed on stages in the Netherlands, Germany, Austria, The Czech Republic, Ireland, the United Kingdom, Japan, New Zealand, Australia, Canada, and the United States. 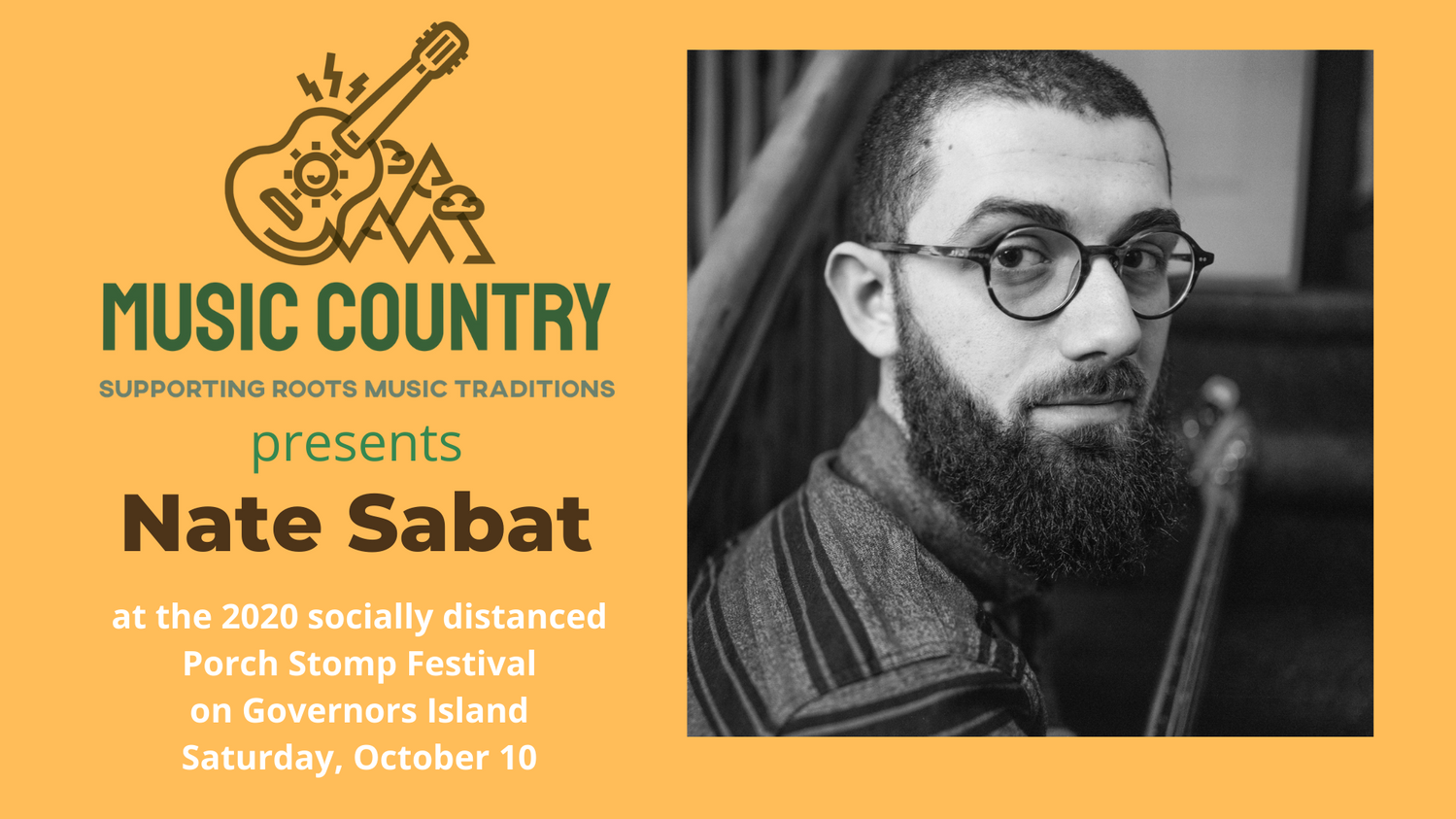 1:00 Bluegrass Bluegrass is a Porch Stomp tradition! Cynthia Landon plays flatpick guitar. You can catch her singing and playing bluegrass, classic country and her own original songs at various jam sessions and gigs throughout the New York City area. She brings her own original style to acoustic music. Kevin Cahill is one of New York's premier flatpick guitarists. A fixture in the New York Bluegrass scene, you'll find Kevin singing and playing traditional bluegrass, fiddle tunes, Americana and old-time at jam sessions and gigs all over New York. As an acoustic duet, Cynthia and Kevin play a fun, wide variety of music including Americana, traditional bluegrass with vocal harmonies, flatpick fiddle tunes and dynamic originals. 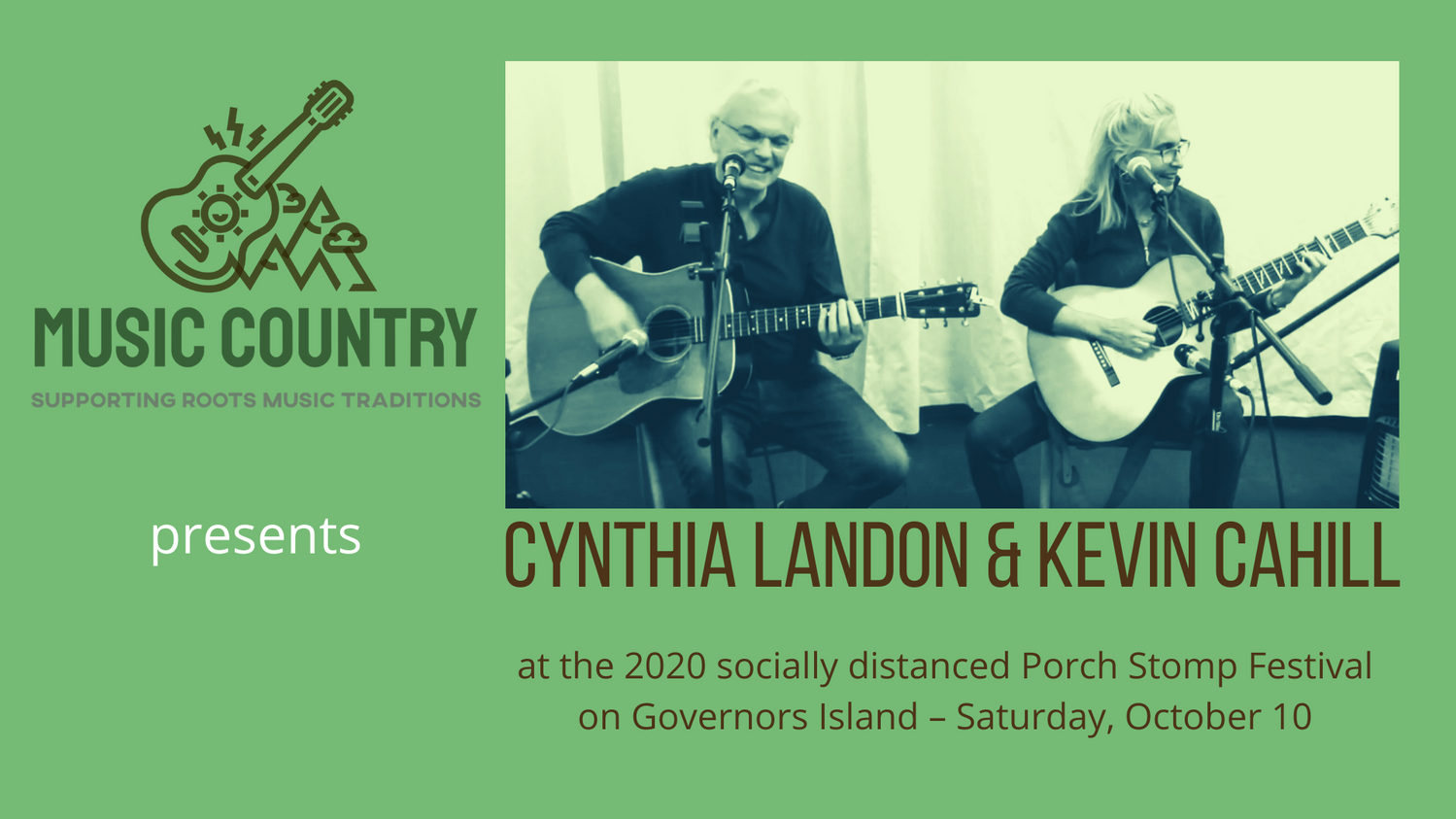 2:00 Black Roots Before there was jazz or gospel, there was Black folk music, the foundation of American music today. Come to the Music Country stage to hear Vienna Carroll and Newman Taylor Baker share early African American music – Spirituals, Work songs, and Blues, including Prison Blues. Vienna Carroll is a singer, playwright, actor, historian, and herbalist. She learned music from the Black Ladies of her youth, including her fearsome great grandmother who played guitar to country singer Minnie Pearl on Saturday night radio but only proper Pentecostal chords in church on Sunday. Newman Taylor Baker is a master percussionist, composer, vocalist and educator, originally from Petersburg, VA. His paternal grandfather was the only former slave to receive a PhD from Yale University. Newman has traveled over the world through his solo drumset project, Singin' Drums and washboard explorations with The Ebony Hillbillies. He has worked internationally with jazz giants including Joe Henderson, McCoy Tyner and Henry Grimes. 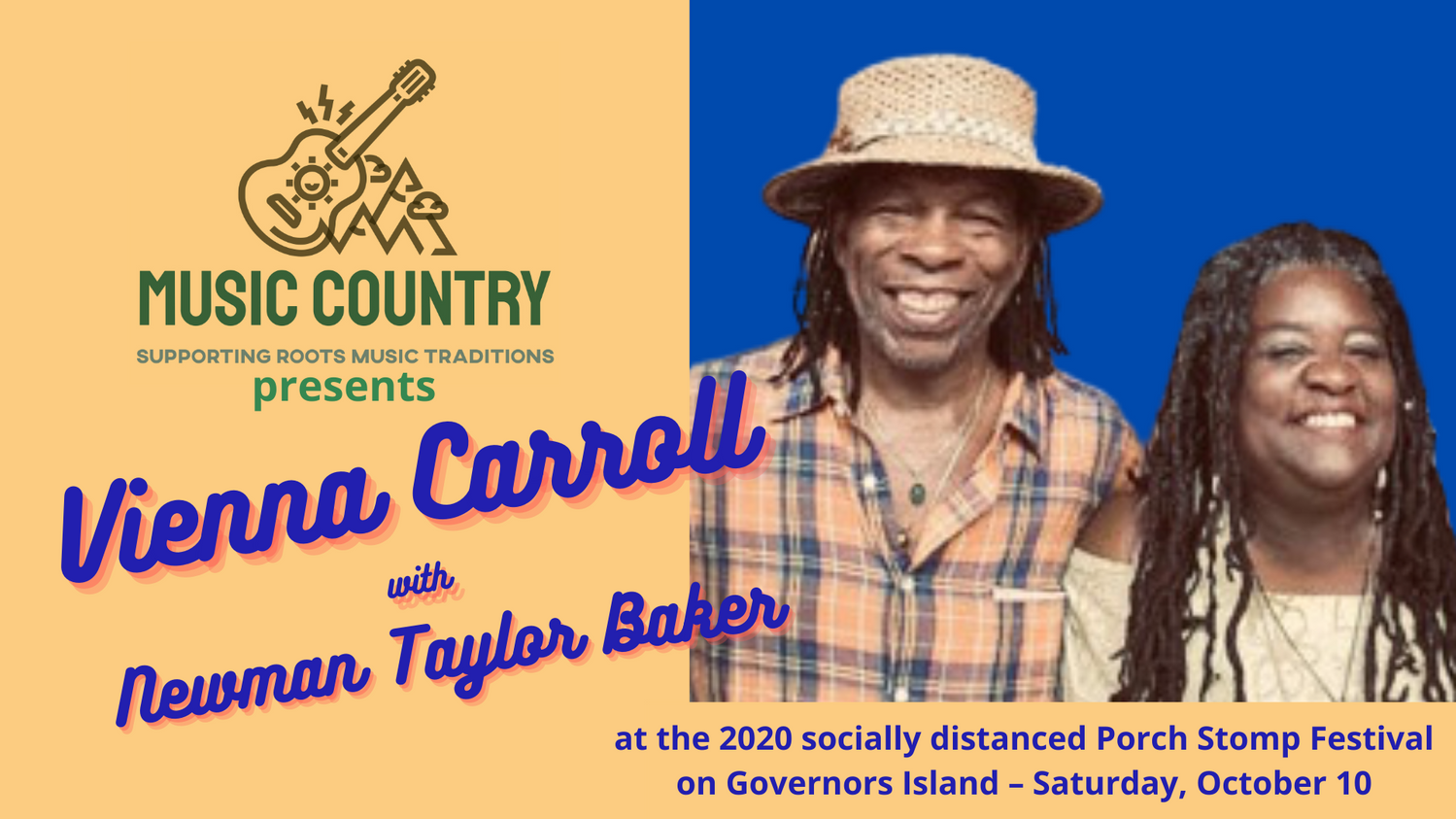 3:00 Native American Ty Defoe of the Oneida and Ojibwe Nations brings traditional Hoop Dance to Porch Stomp The beauty of dance is often discovered in the message it presents. The Hoop Dance is just such a dance; one of a message of interconnectedness and of beauty. It is a metaphor for the process of regeneration apparent in our lives in many guises. The four colors of the hoops are symbols of interdependence and unity - the four human races, the four seasons, the four directions of the compass. As the Hoops move they speak of renewed creation of all of the universe. 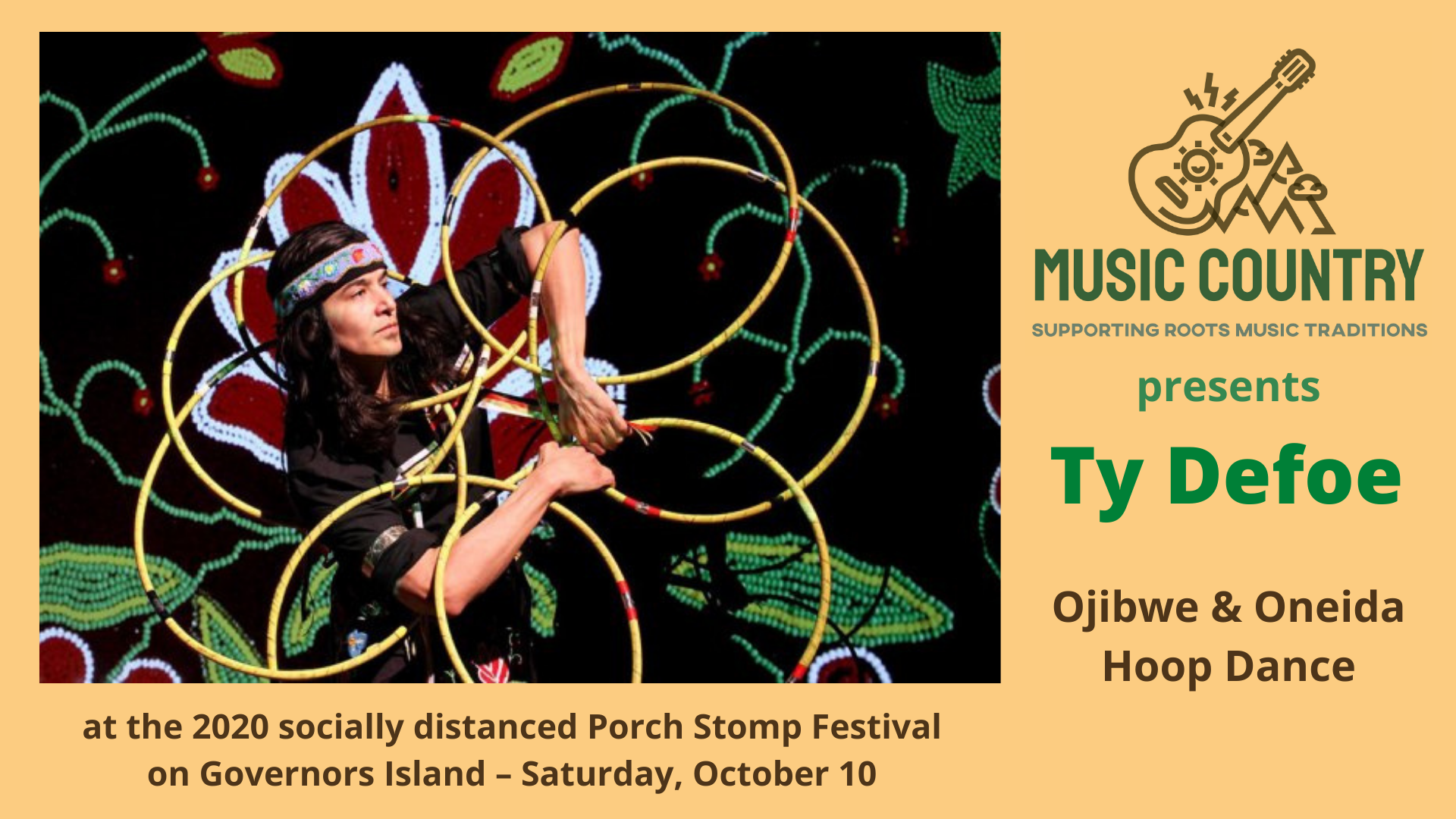 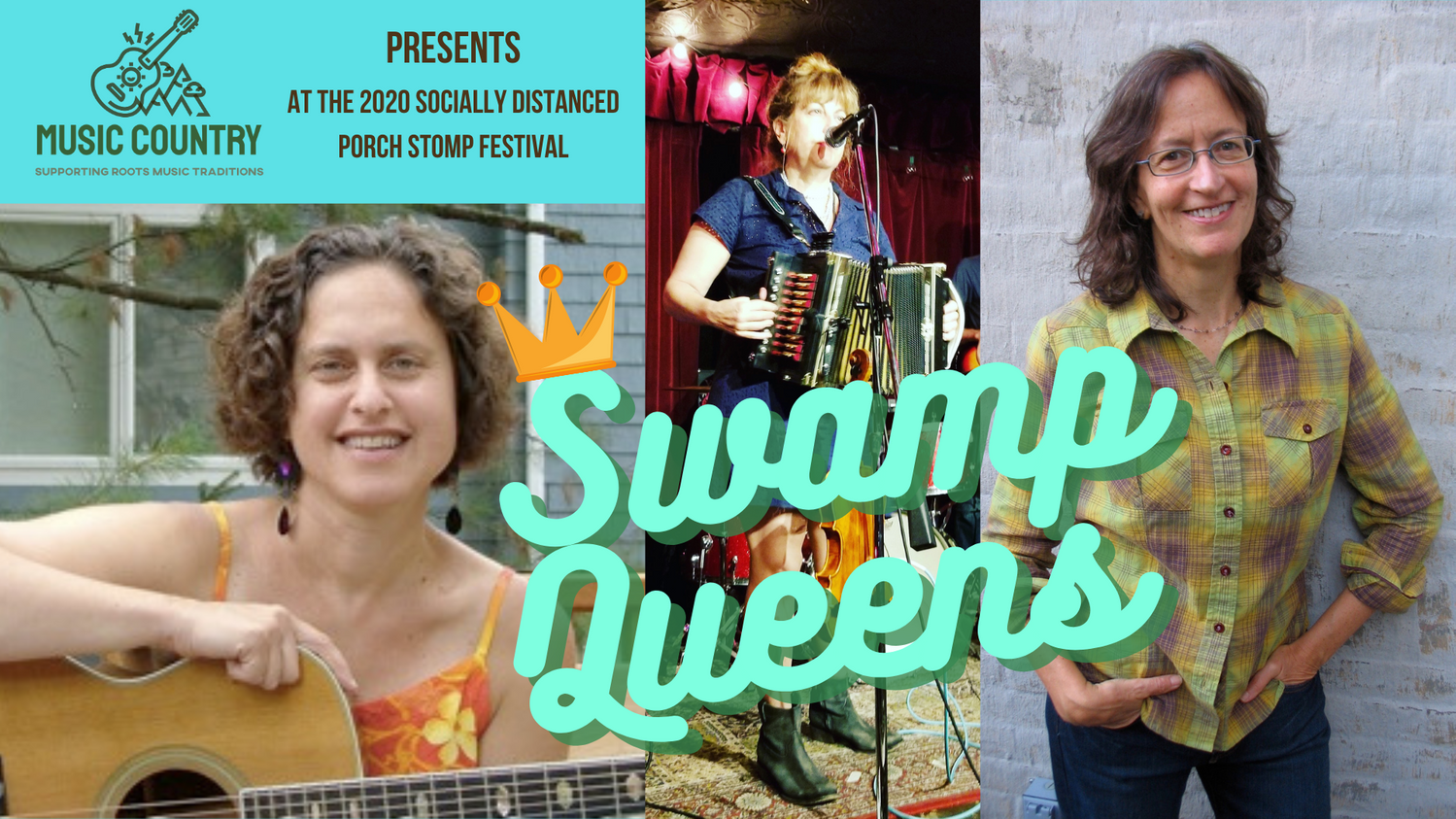